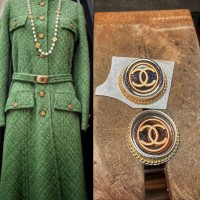 Can you imagine the kind of woman that worn these buttons on her 1940's woollen Chanel coat?

The lady I aquired these buttons from, inherited them from her Mother, who was a avid button collector.  Her Mother had each button or buttons if she had multiples of the same, in seperate boxes with information cards attached.

These buttons were from the Chanel Winter 1940 collection.   Coco Chanel produced some bold colourful woollen coats in an effort to bring some colour to a terrible situation during WW11.  It is believed that many wealthy estates and noble homes were looted during the attack on Paris, and many designer label clothes were stolen, not so much for their value, but for the sheer necessity of warmth.

These clothes were later discarded and not found until after the end of the war.

Some fabrics were able to be saved, but many were left as only threads and the buttons became the only thing worth salvaging.  That's the story behind these buttons.

They do show some slight surfaces scratches and some rub marks, but in general, they are in excellent condition considering the life they have led thus far.

I have set them in solid, recycled sterling silver.  Because the buttons themselves are a gold tone metal, I have added a touch of fancy 9ct yellow gold around the base of the setting.

Then in true Coco Chanel style, I have added some lovely white fresh water pearls to the sterling silver ear hooks.

These earrings are pure elegance and a peice of vintage jewellery that will stand the test of time.

Your jewellery journey begins, with a peice of wearable history, created just for you by Porsha Bella Jewellery.